by Dr. Dale A. Olsen

Below is a chronological list of books I have written (or edited), containing publisher information and links for purchasing them (see also Amazon.com), brief statements or reviews about their contents, other data, and links to accompanying audio examples (if available) and visual images. All audio examples and images are the property of Dr. Dale A. Olsen, who, with this statement, gives his unsolicited permission for their limited use for noncommercial and nonprofit educational purposes only. Please contact me for other permissions or further information about my publications. 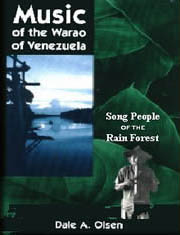 Music of the Warao of Venezuela: Song People of the Rain Forest

Cultural tragedy often accompanies the death of biological species in the South American rain forests. As fragile as the ecosystem is the culture of the Warao Native Americans continues to thrive. In this lively blend of musicology, anthropology, and environmental awareness, the author argues that music holds together much of the Warao’s existence. Hardback published in 1996.
Click here for AUDIO EXAMPLES and more information. 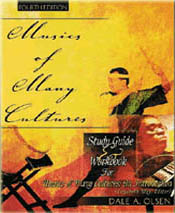 This study guide and workbook is designed to guide students through the diverse chapters of Elizabeth May’s textbook, Musics of Many Cultures: An Introduction (University of California Press, 1980), for college and university world music classes. The workbook helps both music and non-music majors more clearly understand the materials in the text; it will also aid in preparations for exams. Original edition published in 2000; fourth edition published in 2013.
Click here for more information. 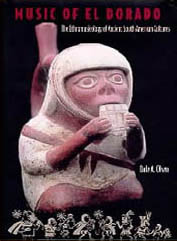 In the first comprehensive synthesis of pre-Columbian Andean musical instruments from Colombia and Peru, the author breathes life and humanity into the music making of numerous ancient cultures in the northern and central Andes. He assesses three decades’ worth of archaeological and anthropological findings from diverse collections, museums, tombs, and temples. Hardback published in 2002; paperback version published in 2004.
Click here for AUDIO EXAMPLES and more information.

Dale Olsen begins with a very telling quote from Christopher Columbus: ‘Truly for gold he can gain entrance for his soul into paradise’. Naturally, the book is not about metal and Catholic spirituality at all, but about cultures in which other values besides those of the Spanish (and, by extension, ourselves) held sway. He implies, and then discusses at some length, that ancient South American cultures such as those of Peru and Colombia placed a high, even religious premium on musical products and productions. Olsen uses ethnographic analogy – the study of modern cultural/ritual practices to determine potential continuities over long spans of time and reconstruct ancient lifeways – to show how music has played a key role for millennia. His evidence is first hand in the case of the North Coast of Peru, as he worked with the famous shaman Eduardo Calderón of Trujillo for many years and key archaeologists such as Christopher Donnan. Thus, Music of El Dorado adds significantly to our understanding of how music fits into visionary spirituality past and present.

However, there are certainly ways in which a specialist in one art form (the aural) cannot help but fall a bit short when using another art form (the visual) as a central part of his or her analysis. When discussing the actual musical instruments, with their correct technical terminology and sensitivity to nuances of sound, Olsen is very convincing, generates appreciation, and remains surprisingly readable for a non-musician. However, being an art historian, I must object to a few assumptions that Olsen makes regarding art as evidence for music. He treats such art styles as those of the Moche, the early hegemonic culture in northern Peru c. AD 1- 800, as encyclopaedic treatments of the daily and ritual lives of their makers. He writes, ‘their pottery is like a ceramic ethnographic textbook’ (p. 15), despite the fact that archaeologists and art historians repeatedly agree that certain subjects are not illustrated in the sculptural or painted record. Nor can small-scale ceramic surfaces detail all aspects of an ancient practice. Therefore, for example, when Olsen comments that Moche musical scenes show only a flutist and a drummer, it cannot be concluded, as he does, that the actual ceremonies only featured a limited range of performers. So much archaeology is going on in this area (having just come back from there in August 2004, I can personally attest to this) that such generalisations are dangerous as well. The most serious problem he flirts with is using objects from private collections whose pieces may not have been carefully screened by objective scholars. If the instruments on which he bases his analyses are not, in fact, ancient, then the foundations of his findings are suspect from the outset. Some plain or lesser objects in all collections, as well as some of the most impressive, are often found to be heavily reconstructed or culturally incorrect when a trained conservator, scholar, and, or, curator examine them in person.

These objections do not, however, take away from the copiously referenced, logically presented, and original aspects of Music of El Dorado. Perhaps the most wonderful thing about the book is that it directs the reader to a website containing the actual recordings of the illustrated instruments when they were played. Usually a visiting musician and a very lenient conservator are the only ways for the public to gain such an experience. Having access to these recordings is obviously invaluable for conveying what he calls ‘non-speech communication’ and listening creates a powerful sensory interaction with the sounds of the past and present. His presentation of the words of shamans, their fascinating points of view and ways of using music, such as their experiences of synaesthesia, are all remarkable. Olsen also is careful to frame his more controversial claims as hypotheses, and presents the shaman’s answers fairly. For instance, after asking Calderón if he thought the Moche pursed-lip human effigy vessels depicted shamans whistling to call spirits, Olsen reports his informant as replying ‘One cannot know … They are probably just people whistling’ (p. 153; one is reminded of Picasso saying that a bird in the painting, Guernica, is just a chicken). Of course, the comments of one man do not invalidate the point that music was a highly spiritual pursuit in the ancient Americas and Olsen gives us many insightful ways to approach this crucial topic. 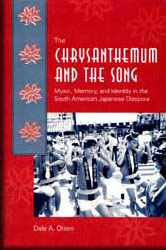 The Chrysanthemum and the Song: Music, Memory, and Identity in the South American Japanese Diaspora

Music helps form and nurture ethnic identity for large populations of people of Japanese descent in Argentina, Bolivia, Brazil, Peru, and Paraguay. In a story never before told, the author offers a musical history and ethnography of this vibrant Asian diaspora, the largest population of overseas Japanese in the world and one of the most successful subcultures in South America. Hardback published in 2004. This book is out of print, but I (the author) have over 200 copies that I wish to distribute free of charge. All I ask is for the price of postage for me to mail the book anywhere in the United States (approximately $10). Please send me an email for a free copy — I can even autograph it if so desired.
Click here for AUDIO EXAMPLES and more information. 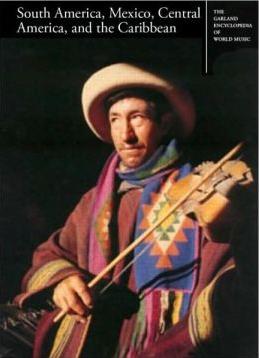 Volume 2 of the Garland Encyclopedia of World Music (coedited by Dale A. Olsen and Daniel Sheehy) includes essays by dozens of notable scholars that describe and study the extraordinarily rich and varied music from all the countries south/southeast of Florida and the Rio Grande River. Unique emphasis is given to 25 Amerindian cultures, including the Yuma and Otopame (Mexico), Maya (Guatemala), Kuna (Colombia and Panama), Suya (Brazil), Aymara and Quechua (Ecuador to Chile), Mapuche (Chile and Argentina), Warao and Yanomami (Venezuela), and many more. Several articles are devoted to the popular music of Mexico, Brazil, the Caribbean islands, and other areas. A survey of the music of immigrants to Latin America shows how arrivals from China, India, Indonesia, Japan, Germany, Italy, and Spain have preserved their musical traditions in the region for the past 150 years.

“Garland’s ambitious 10-volume series takes a cultural approach to its focus on the music of all the world’s peoples. Each volume is arranged topically, regionally, or by ethnic group, and complemented by an extensive index. Although each volume will differ because of the nature of the material, the organization remains consistent throughout all: regional overviews first; music in the social context next; then finally, the musical traditions of individual countries or ethnic groups. Of exceptional value are the CDs that accompany each volume, often with previously unrecorded music, as well as the resource guides, extensive bibliographies, and photographs. Separate pricing makes it easy to buy just the volumes that your patrons need and will use.” 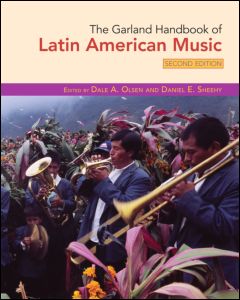 The Garland Handbook of Latin American Music is comprised of selected essays from The Garland Encyclopedia of World Music: Volume 2, South America, Mexico, Central America, and the Caribbean (1998). Revised and updated for use as a college textbook, the essays offer detailed and readable regional studies of many music cultures south of the United States and examine the ways in which music helps to define the identity of that very large and vibrant area. The book includes two CDs of musical examples that correspond to many of the essays. Second paperback edition published in 2008.
Click here for more information. 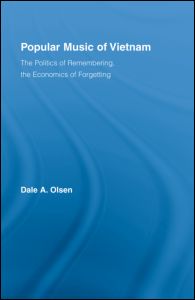 Popular Music of Vietnam: The Politics of Remembering, The Economics of Forgetting

Based on the author’s research in Ho Chi Minh City, Hanoi, and other urban areas in Vietnam between 2003-05, this study of contemporary Vietnamese popular music explores the ways globalization and free market economics have influenced the music and subcultures of Vietnamese youth, focusing on the conflict between the politics of remembering, nurtured by the Vietnamese Communist government, and the politics of forgetting, driven by the capitalist interests of Vietnam’s market economy and music industry since the end of the American embargo. Hardback published in 2008; paperback version published in 2010.
Click here for more information. 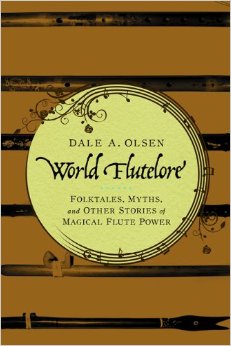 This book explores the cultural significance of flutes, flute playing, and flute players from around the world as interpreted from folktales, legends, myths, poems, ethnographies, and other stories–in a word, “flutelore.” A scholarly yet readable study, World Flutelore: Folktales, Myths, and Other Stories of Magical Flute Power draws upon a range of sources in folklore, anthropology, ethnomusicology, and literary analysis. Published in 2013.
Click here for more information. 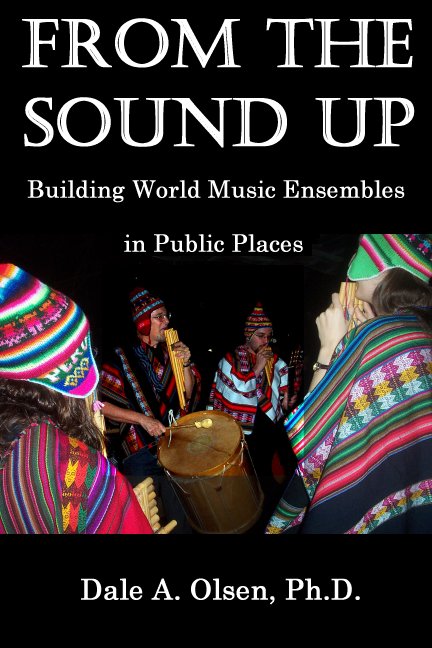 From the Sound Up: Building World Music Ensembles in Public Places

This book, self published in 2018, is a narrative about the World Music Ensemble Program at Florida State University from 1973 to 2008, the 35 years of my employment there as Distinguished Research Professor of Ethnomusicology. While admittedly it is partially a memoir, my major goal with this book is to provide philosophical bases and practical organizational and instructional strategies for creating world music ensembles in schools and other public places where participatory world music groups can be instructive and constructive vehicles for creating cross-cultural communication, goodwill, and understanding; personal and community well-being; healing, joy, love; and even, perhaps, world peace.