Diane and I love to travel, in case you haven’t noticed. Ever since we were volunteers in the Peace Corps to Chile in the 1960s we have traveled throughout South America, the Caribbean, Mexico, Europe, East Asia, Southeast Asia, Polynesia, Middle East, and North America. In fact, we have been in over 60 countries. The following paragraphs explain some of our travels since 2013, when I first began this web page.

We traveled to Cuba in March 2013 with a group of about 25 people on an organized tour organized by Tallahassee Community College. We began by flying to Miami and spending a day and night visiting South Beach, Vizcaya Mansion, the botanical garden, and eating Peruvian food. Bright and early we boarded a charter for the short flight from Miami to Havana, where we spent several nights at the famous old Hotel Nacional (National Hotel) on the waterfront (malecón). We visited a variety of sights in Old Havana during the day—many colonial structures and pre-revolutionary buildings. 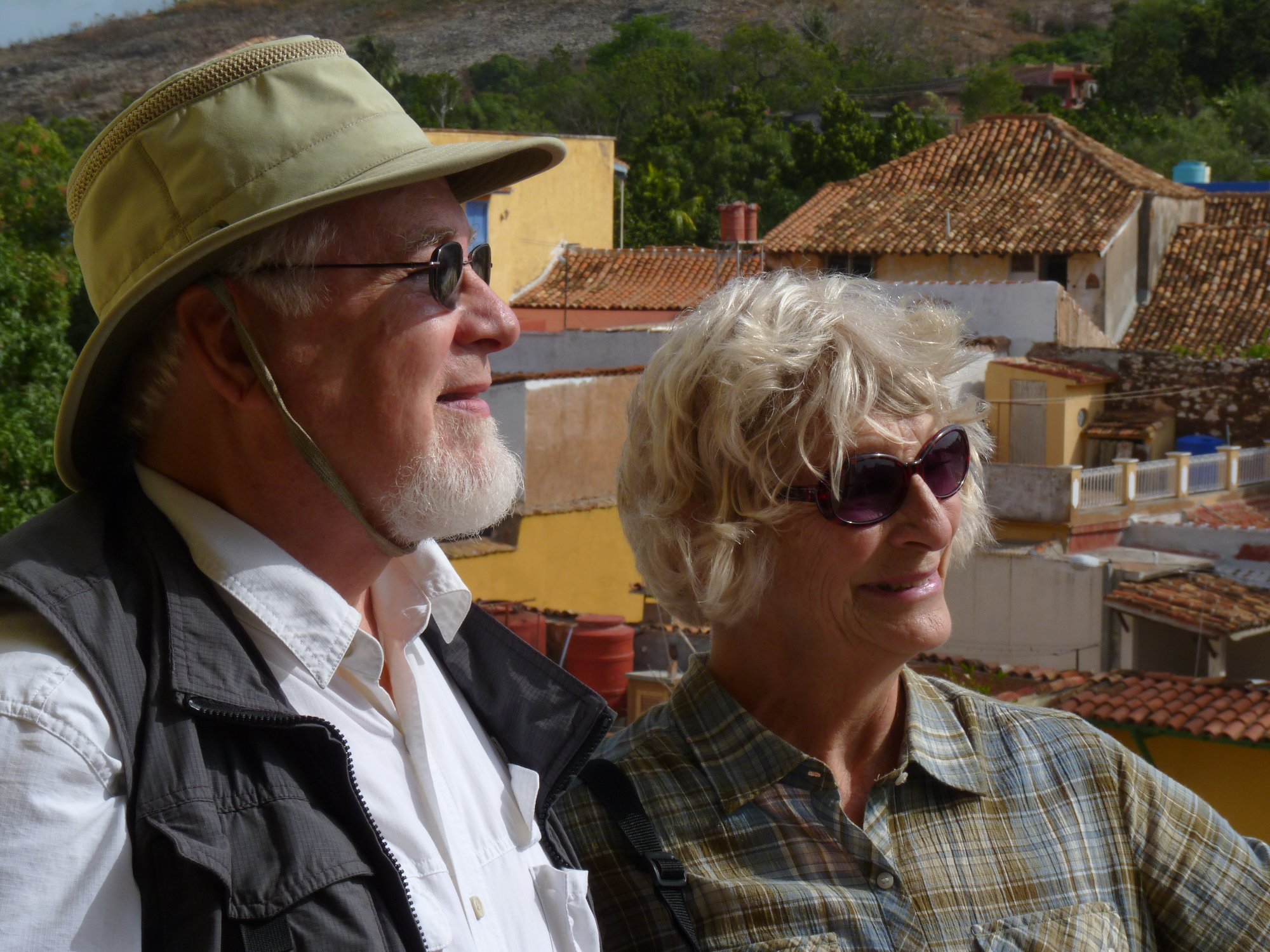 Cuba is famous for its old American cars, and I especially enjoyed seeing the 1953, ’55, and ’56 Chevys because those are the types of cars I had in college. We also visited western Cuba, the locale of beautiful limestone haystack-shaped mountains (mogotes) in the Viñales Valley. We also went to one of the oldest towns in Cuba, Trinidad, on the south coast (this picture was taken of us on a balcony adjacent to the roof of the Cathedral in Trinidad, Cuba). Many of these towns and areas are UNESCO World Heritage Sites, and walking in the old streets and unspoiled rural paths is like going back in time a hundred years or more. 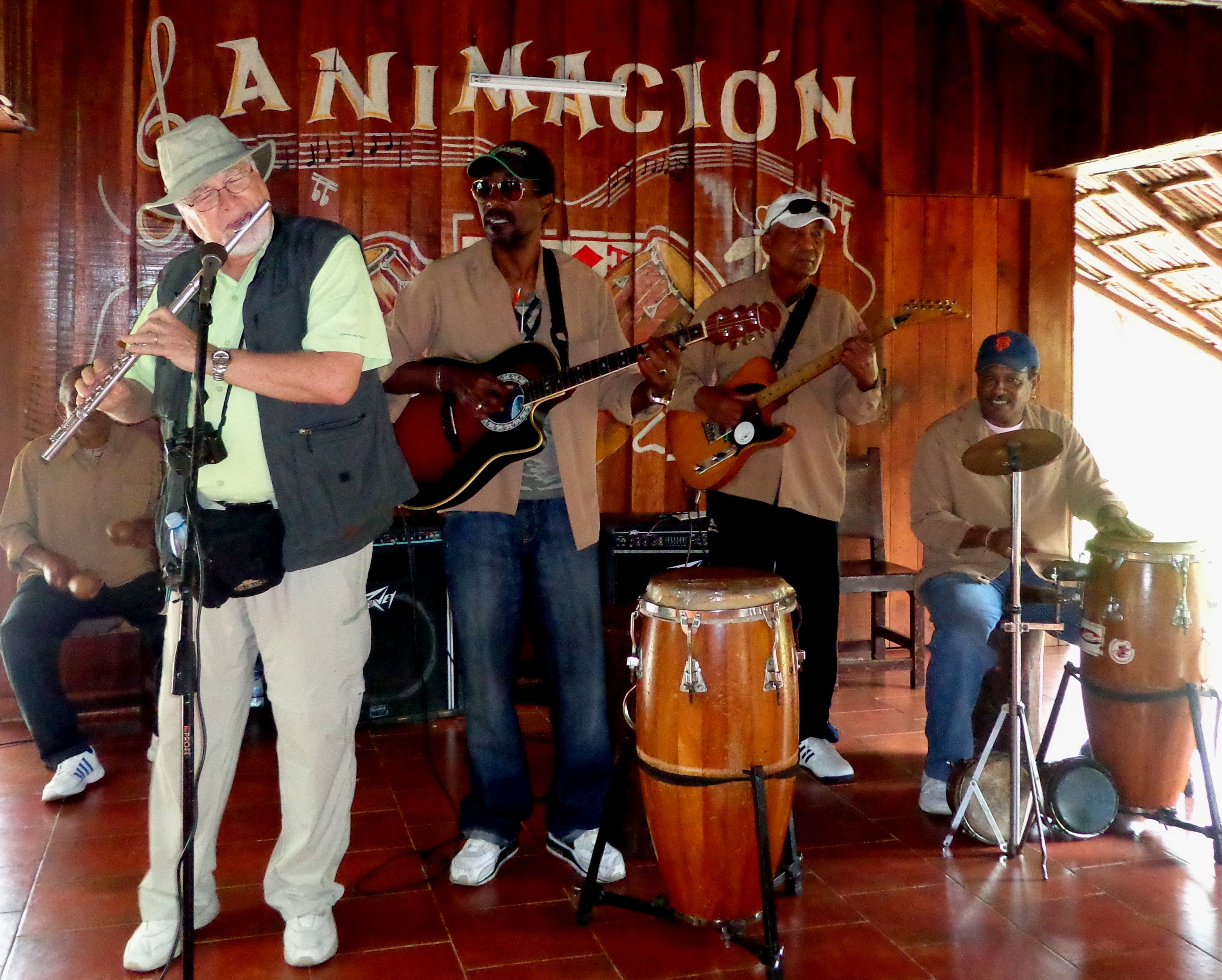 I took my western flute with me to Cuba because I love improvising Latin jazz (salsa, guajiro, son, etc.). Fortunately, I got to jam with numerous small groups at restaurants, streets, parks, tourist sites, and other venues. That was great fun!

We took a 7-day cruise with another couple to the Western Caribbean over Christmas, 2013, leaving from Tampa, stopping in Key West, visiting Roatan Island in Honduras, Santo Tomas de Castilla in Guatemala, and Costa Maya in Mexico. Our major objective was to visit some Mayan ruins that we had not seen before, and we did: Quirigua in Guatemala and Dzibanche in Mexico. We also experienced Garifuna music and dance in Roatan, Honduras.

In January 2014 we traveled to the Holy Land (Israel & Jordan) with 25 members from our church (First Baptist Church) in Tallahassee. We flew to Tel Aviv and went by bus to many archaeological sites, historical regions, and current/active places. 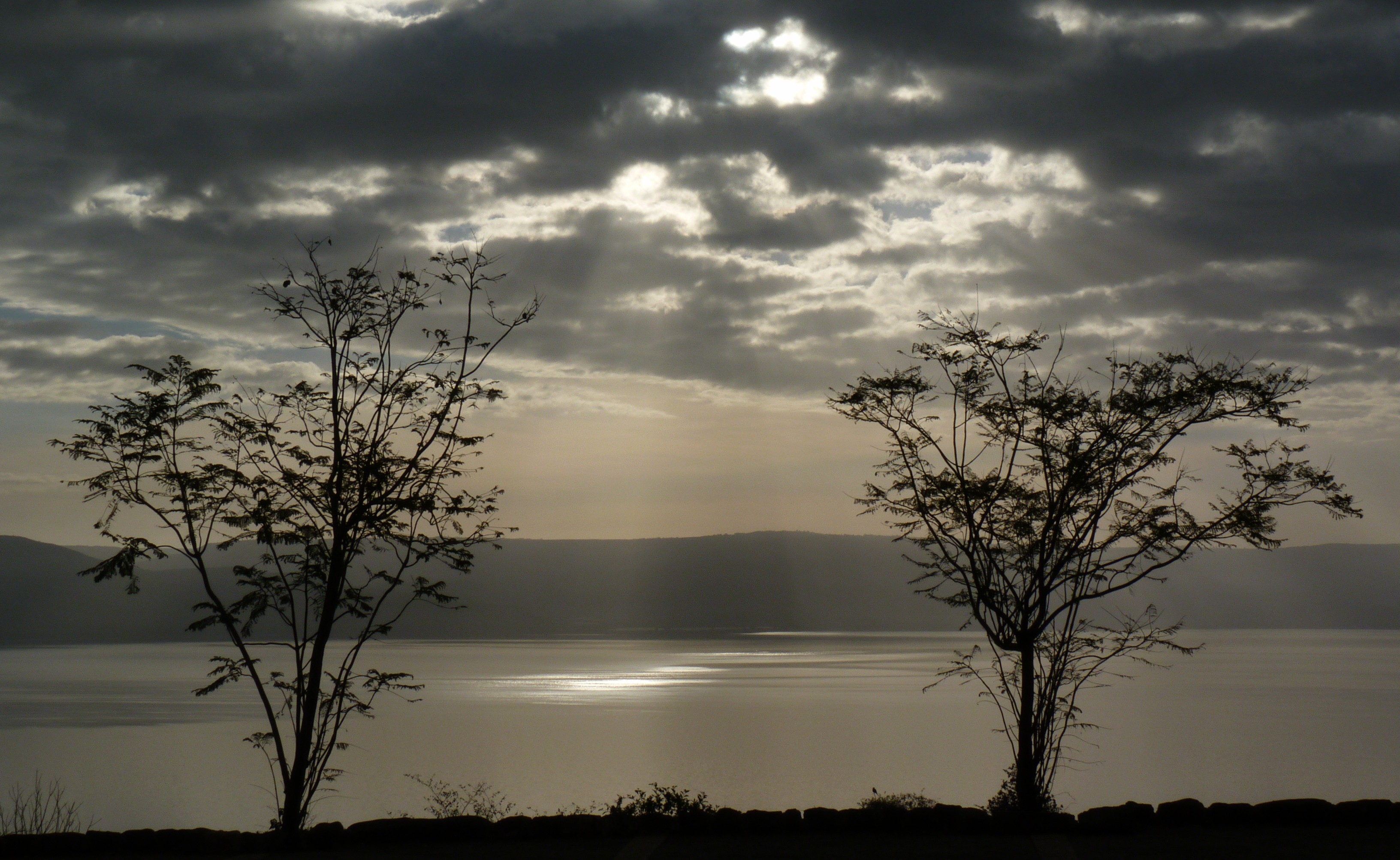 We visited many towns and regions where Jesus began his life and carried out his ministry, 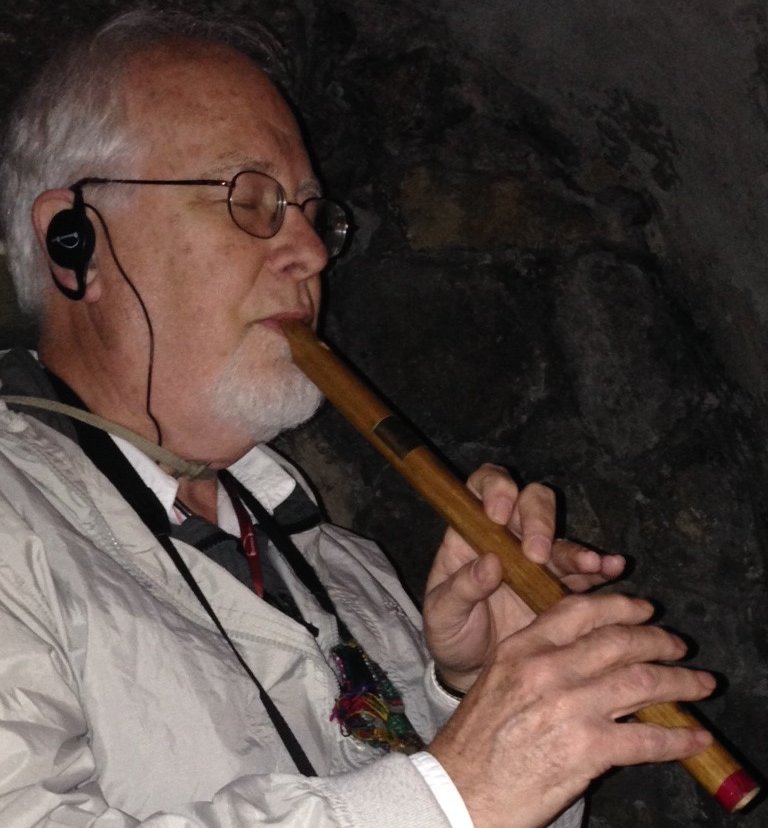 such as Bethlehem, Nazareth, Mount of the Beatitudes, Capernaum, Tiberius, the Sea of Galilee, Jordan River, Jerusalem, and much more. 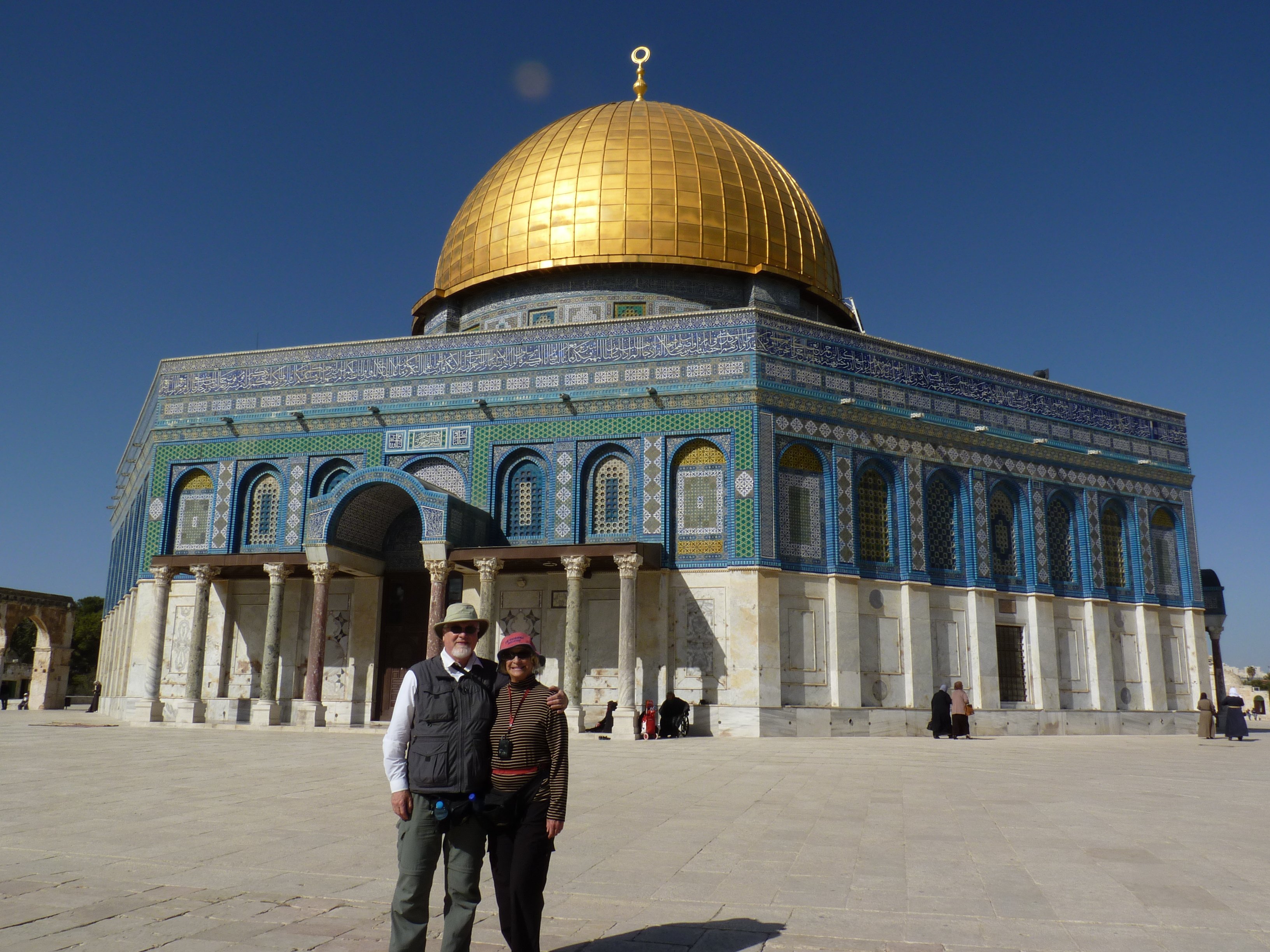 We also went to Amman and Petra in Jordan. 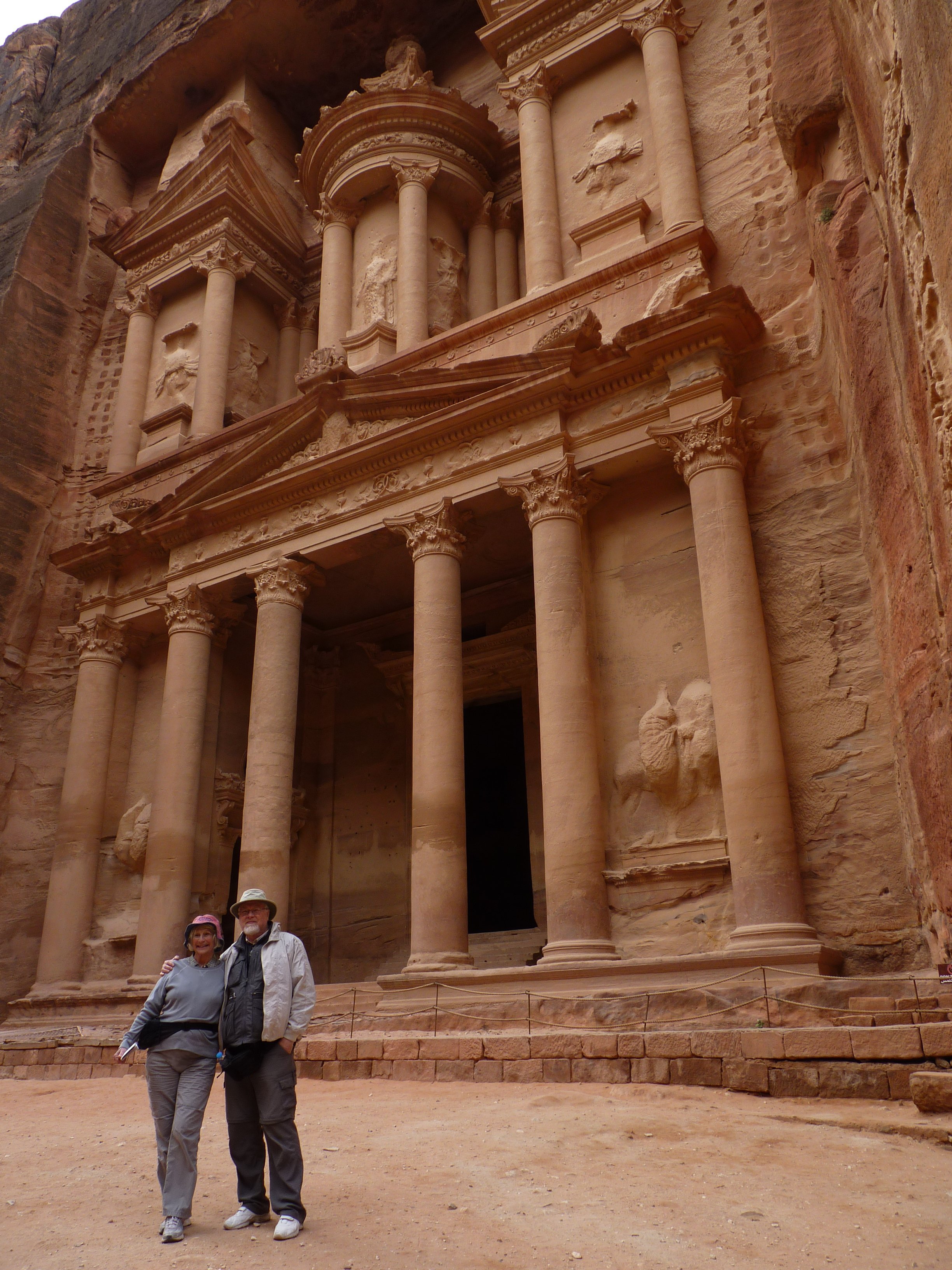 It was a wonderful trip and a tremendous learning experience. Our first 2014 trip was to the Holy Land (Israel and Jordan)  In January , often walking where
Jesus walked and where many Old Testament events took place.

From June 1-15, 2014, Diane and I went on a cruise called “Ice” with Semester at Sea, leaving Stockholm and sailing to Copenhagen, then to the Shetland Islands (Scotland), on to three ports in Iceland, then to Belfast, and ending up in Southampton. We were gone 15 days on a wonderful educational cruise that Diane won in a lottery with OLLI (Osher Lifelong Learning Institute) at FSU. The scenery in the Shetland Islands and Iceland was fabulous, and the lectures on board were educational and very enjoyable. Of course, we ate too much.

One of my ethnomusicology colleagues and a friend for over 40 years, Dr. Ted Solis, also took the cruise (neither of us knew we were going to be on the same cruise), and we had a great time, talking about past explorations of the Semester at Sea and remembering our many friends who had been on the faculty over the years (Max Brandt, Phil Sonnichsen, and others). Today’s Semester at Sea ship is new (the MV Explorer), which Ted explained is much better than the old ships used by the Semester at Sea back in the 1970s, 80s, and 80s.  There is no longer a gamelan on board (nor are there any musical instruments of any type any more, except for a piano), but the library and computer facilities are good.  Along with about 800 adults were several hundred students that were getting credit for courses. 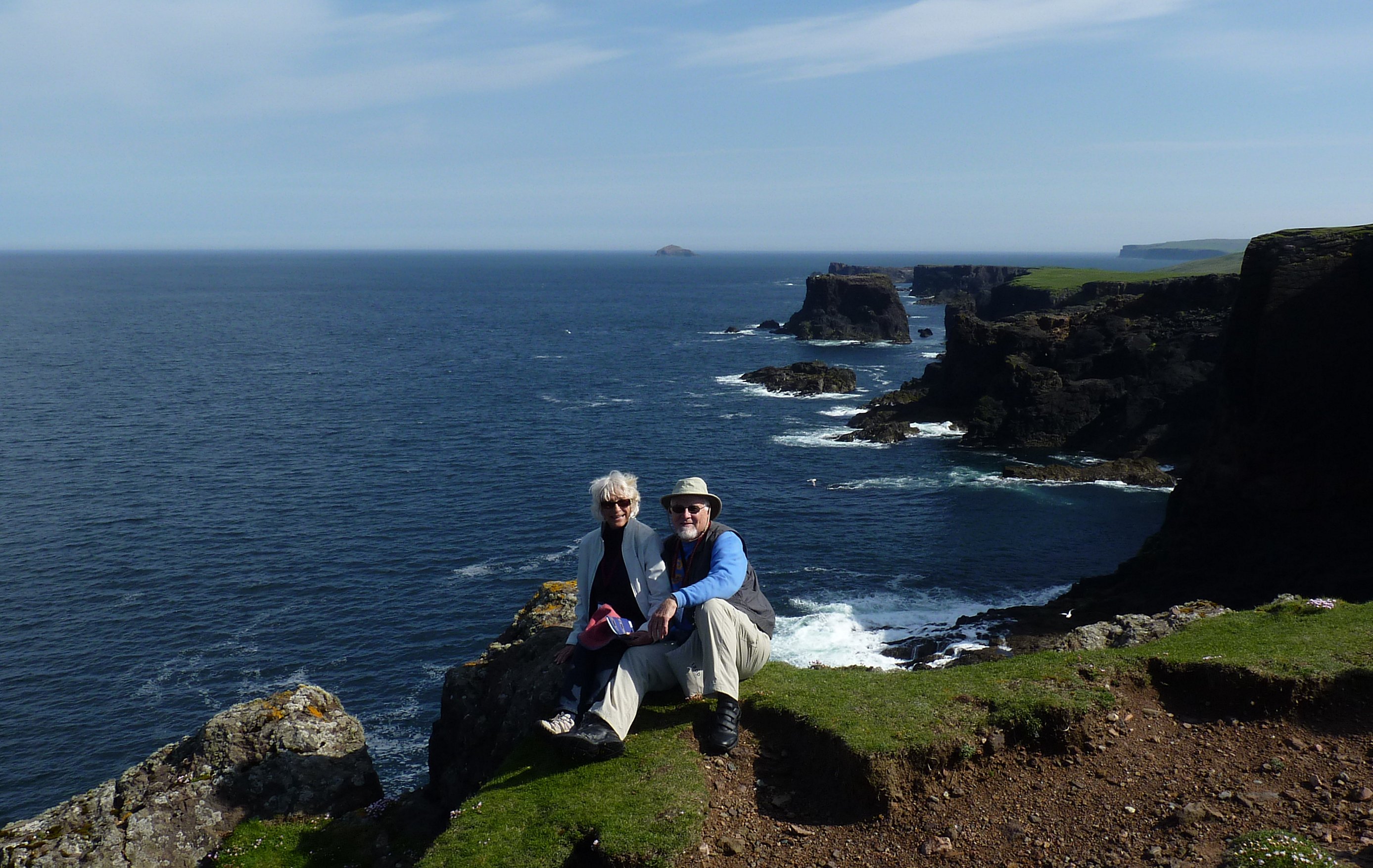 Here is a photo of Diane and me sitting on a cliff by the Eshaness lighthouse in the northern Shetland Islands, overlooking the North Sea.

Below is a photo of us next to the the  Goðafoss (“waterfall of the gods”), one of the most beautiful waterfalls in Iceland, near the northern town of Akureyri. 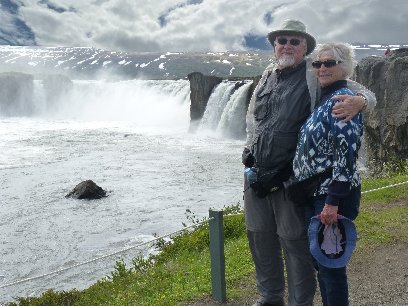 In September 2014 Diane and I, along with 14 of our Tallahassee friends, took a 12 day cruise on Hurtigruten among the fjords of Norway from Bergen to Kirkenes (the most northern town in Europe) and back. Diane and I ended that European adventure by spending a few days in Amsterdam where we rented a houseboat on a canal.

Chile across the Pacific to Easter Island, French Polynesia, and other islands

Over Christmas 2014 and New Years 2015 Diane and I took a South Pacific cruise on Oceania cruise line. We flew to Santiago (Chile), took a bus to Valparaiso, and embarked from that coastal city. Our first stop was the Juan Fernandez Islands, and in particular Robinson Crusoe Island. After several days at sea we arrived at Easter Island where we spent 2 nights. After more days at sea we arrived to Pitcairn Island. Then, more days at sea took us to four islands in French Polynesia–Fakarava, Rangirora, Bora Bora, and Tahiti. We flew back to Tallahassee from Papeete, Tahiti. We’ve always wanted to go to Easter Island and French Polynesia, and we finally had the opportunity.

Slovakian Heritage Tour and a week in Vienna

In July Diane and I flew to Vienna, Austria, and joined a tour of Slovakia that was comprised of people of Slovakian heritage, like Diane–both her grandparents on her dad’s side were born in Slovakia. We toured many parts of Slovakia, visiting castles, taking cable cars into the high Tatra  Mountains, attending festivals, rafting on a river, and much more. One day we arranged to visit Diane’s second cousins whom she had never met. Their daughter, Martina, who is our son’s third cousin, was our interpreter. I had met Martina over a decade ago in St. Paul, and Diane’s aunt Mary Ann and sister Barbara had visited the entire family in Slovakia years ago. We had a great time visiting old homesteads, the Andy Warhol Museum, looking at pictures of other family members, eating traditional food, and just getting to know more of Diane’s people.

After Slovakia we took a ferry on the Rhone River from Bratislava to Vienna, where we rented an apartment for a week, right in the museum district. We had great fun attending many concerts, visiting museums, seeing a show of the Spanish Riding School in the Hofburg Palace, and much more.

In October we cruised the Caribbean on Norwegian Cruise Lines. It was a “re-positioning” of a ship from Boston to New Orleans, by way of San Juan, Puerto Rico; Netherlands Antilles (Bonaire); Curacao; Aruba; Jamaica; Cayman Islands; and Cozumel, Mexico. We had never visited five of those places, so we got to add more countries to our travel list (its about 65 countries now).  This cruise was a part of our extended 50th wedding anniversary celebration, and we traveled with Mary and David Stevenson, our friends that were married on the same day and year as we (June 26, 1965), Louise and Walt, and many other acquaintances from Westminster Oaks Retirement Community in Tallahassee (where Mary, David, Walt, and other friends live).

A conference of SEMSEC (Southeast/Caribbean Chapter of the Society for Ethnomusicology), and an invitation to be a discussant on a session, caused us to travel by air to Trinidad in March. We spent 3 days in San Fernando in the southwestern-central part of the island of Trinidad, where the conference was held. It was wonderful to see many of my former students and numerous old friends (and make new friends, as well).

One of the highlights was climbing Nabarima Hill (aka San Fernando Hill), which is a slight peak that is considered by the Warao Indians (a culture in Venezuela where I did my dissertation research–please link to “Ethnomusicology as Advocacy” from the main page or just below Travels) to be the northernmost sacred mountain in their cosmology–it is a very sacred place for them. While in San Fernando I tried to contact the Warao descendants that live in that region, but was not able to make personal contacts. I left a copy of my book and CD for them with a Trinidadian scholar I met at the conference, but I have not yet heard if the Warao descendants  ever received my gift. 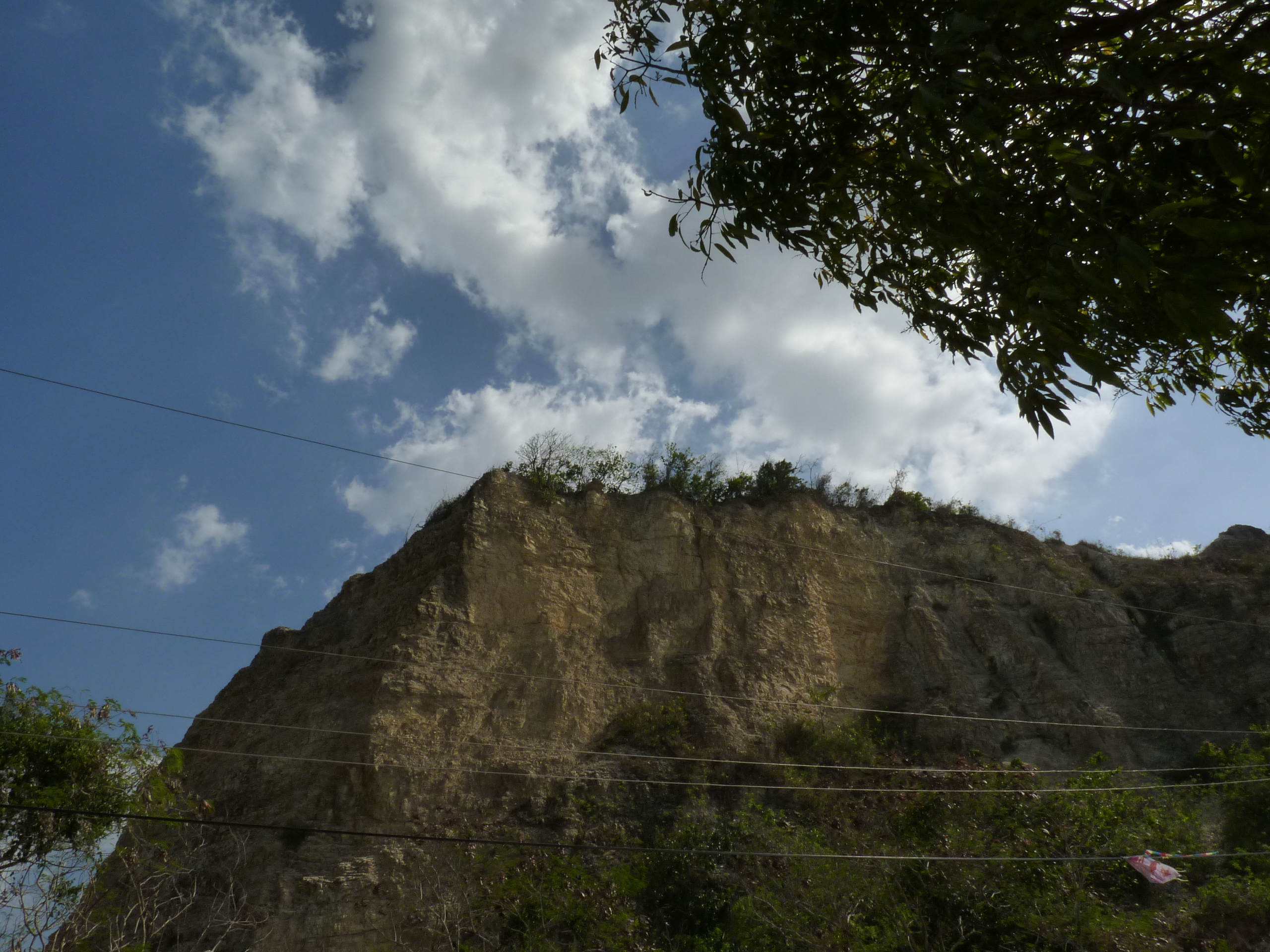 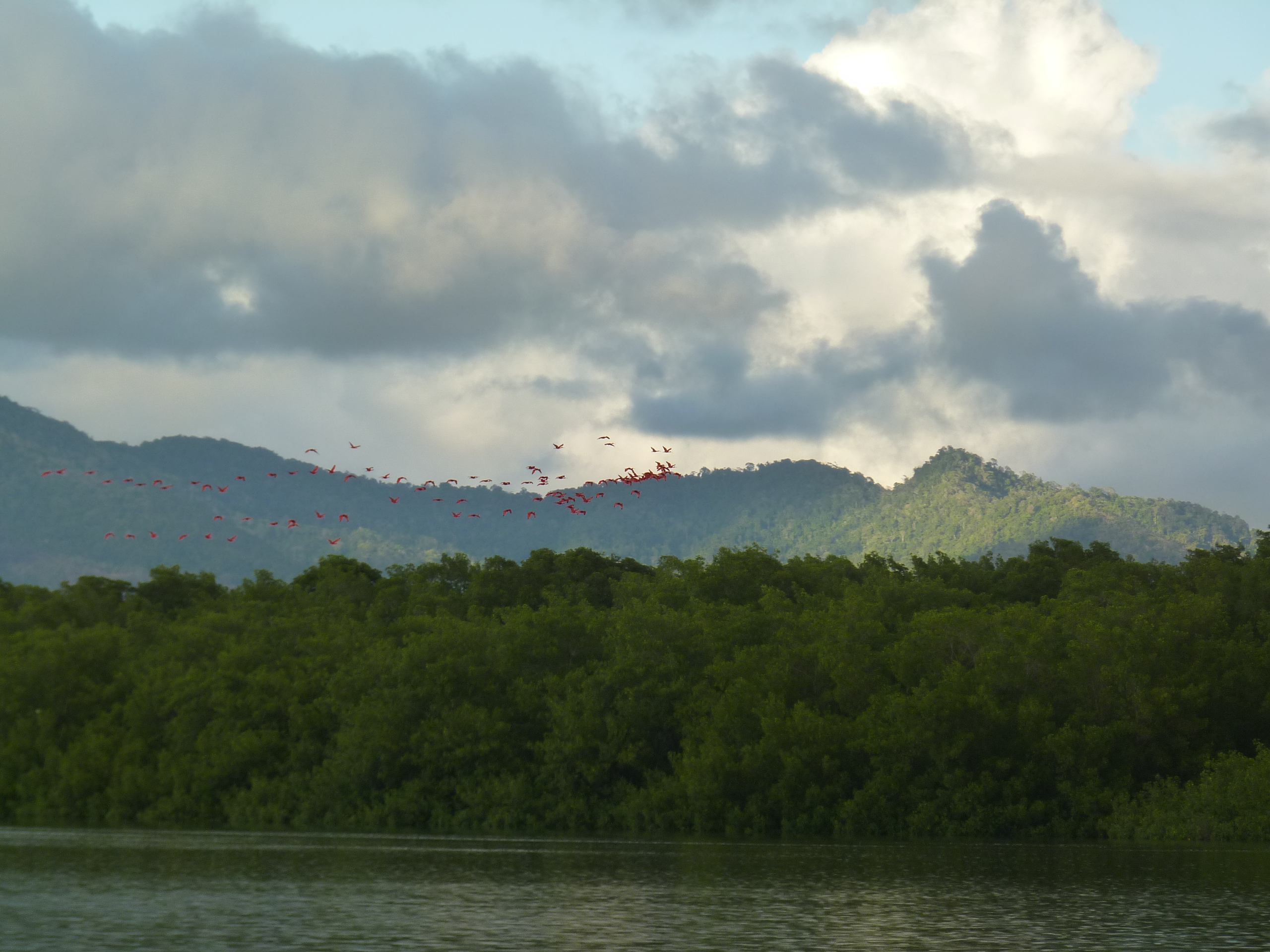 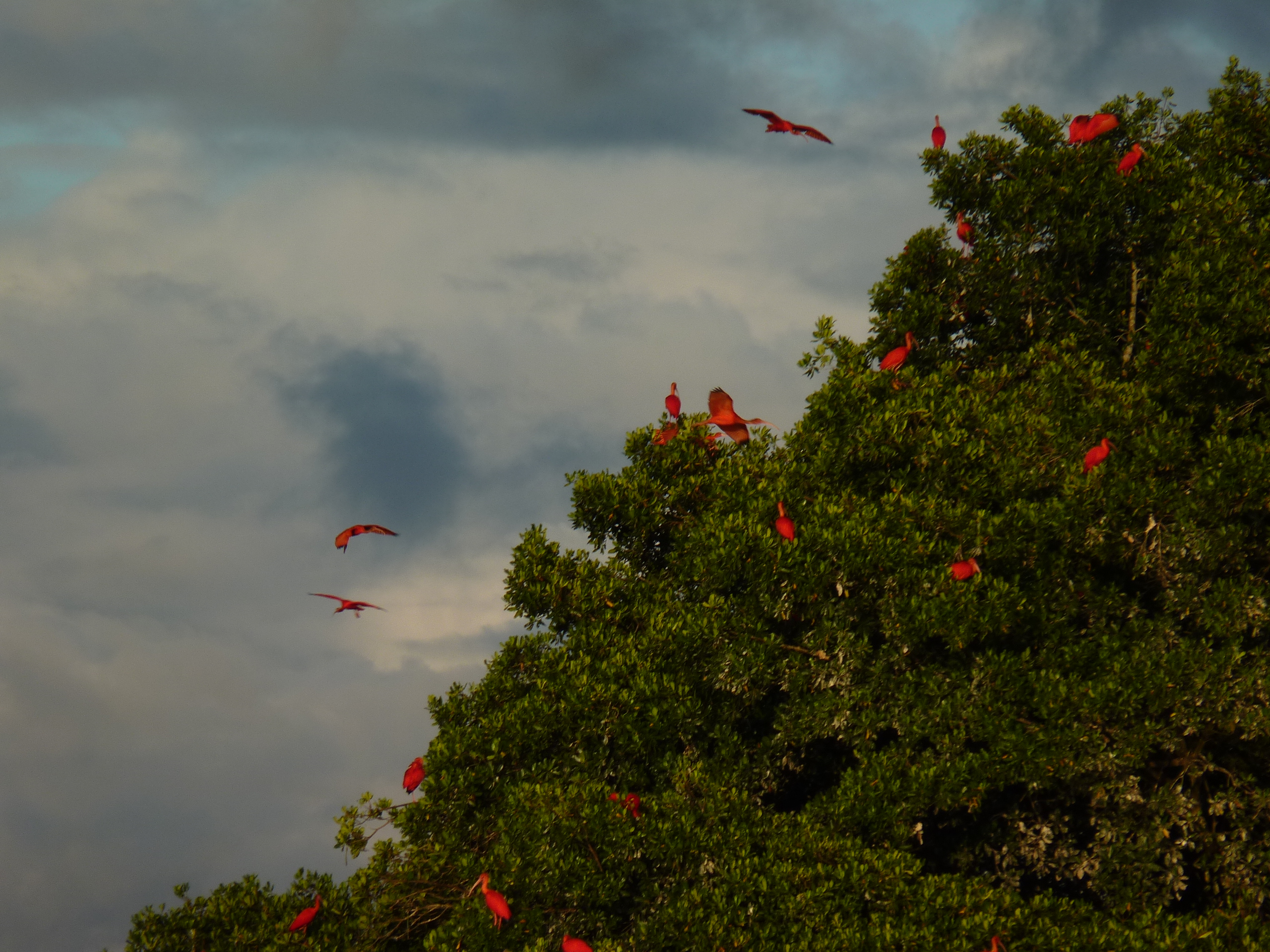 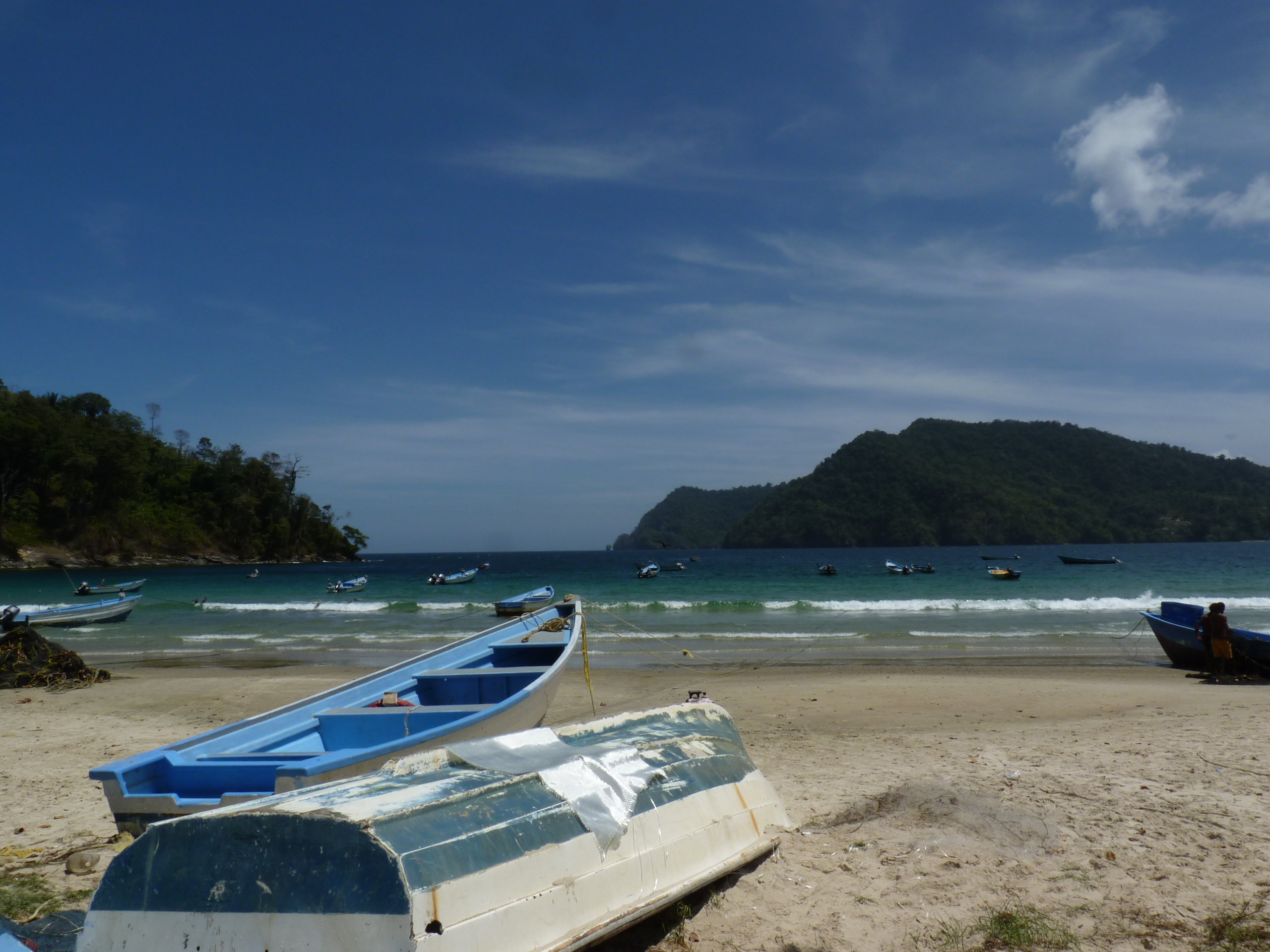 Then we traveled in our rental car to Port of Spain where we stayed for another four nights at the very comfortable Heritage Inn, visiting the North Coast; the fabulous Caroni Bird Sanctuary on the western coast (where every dusk thousands of scarlet ibis, the national bird of Trinidad, fly to a particular island in a large lake to roost); and several Hindu temples. The boat tour we took in the Caroni Swamp was the highlight of our entire trip to Trinidad, although I can say the same about the North Coast, which includes Maracas Bay, Las Cuevas, and other beautiful beach locations. While I did not enjoy driving on the left side of the roads, we survived and had a nice time. We heard a great steelband, excellent East Indian tassa drumming, and a good East Indian popular music group. We enjoyed the food, especially bake ‘n’ shark, one of the local specialties.

The Columbia and Snake Rivers (Oregon and Washington, USA)

In July we will cruise the Columbia and Snake Rivers with our friends, Louise and Walt, on a paddle boat river cruiser. We will drive to Minnesota where we’ll leave our car for 10 days, fly to Portland, take our cruise, fly from Spokane to Minneapolis, visit relatives, and drive home.

So many other places to visit, and so little time!